Peter Frampton, guitarist and grammy winner, places in his studio a pair of BAE 1073s and a BAE 1073D 500 Series Mic Pre/EQ which run into his Universal Audio Apollo interface.

Have you managed to publish your memoirs Do You Feel Like I Do?, released his album All Blues (2019) and another solo album, Frampton Forgets the Words, made with the band The Peter Frampton. It has another full blues album 'in the can' that is awaiting release and has also completed at least six new songs for an upcoming solo album.

When he moved to Nashville in the mid-'90s, Frampton befriended his “favorite engineer”, Chuck Ainlay, who has subsequently worked on most of his material and who is the in-house engineer at his Studio Phenix. Working alongside Ainlay, Frampton has made continual refinements to capture the sonic nuance of his evocative, soulful guitar playing.

Dialing in the tone

“When I am at home, on my guitar amps I always use a U67 and a 57, exactly the same distance away from the speaker so it doesn’t go out of phase,” he explains. “That’s a Chuck Ainlay thing that I stole, and oh my God, it’s great. Those two mics go into my BAE 1073s and then straight into my computer from there.”

Frampton uses it because it is comfortable knowing he can still get an authentic vintage sound by using 'modern vintage' preamps and EQs from BAE. “I use the 1073D on both vocals and on the guitar”, and Chuck likes the 1081 in the studio, especially for drums, because it has the expanded EQ section.

Frampton has his guitar tone dialed in, mainly with old Fender Princeton Reverbs, a Vox AC 15 and a '63 Fender Vibroverb. “I don’t usually use EQ on the way in, because the mic pre is the thing that does all the work. That’s why we’d love more of the BAE mic pres, without EQs, for the studio. They are just so transparent inasmuch as you can get a great sound. They are obviously coloring the sound exactly in the way you want them to.” 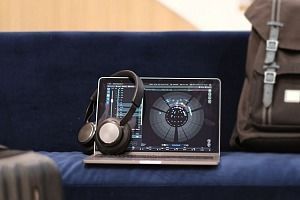